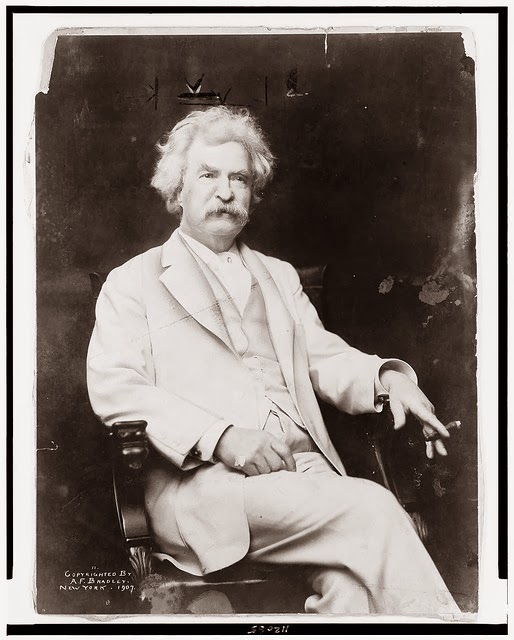 Last time George and Anita were stumbling around in the dark outside Hannibal until found by Jane Canary - you know who she was, right? She guides them towards town, but first they meet a very famous American writer and his wife and find out just what they'll be doing in the not-quite-right town of Hannibal in the Great North American Wilderness Park.

This week with special guests Mark Twain and his wife Olivia (hmmm, I thought she was married to Samuel Clemens) and of course Calamity Jane! Meet them all in...

The last couple of nights have been short walks since I had to go places where she couldn't accompany me. It amazed me when she took off out the door and down the street, noticed Nice Kitty (but didn’t lunge at him), and just kept on moving. It was difficult for me to keep up with her for the first couple of blocks. That's NOT the way walking with Penny usually works. She's usually an anchor, nose just barely off the ground, constantly entranced with smelling EVERYTHING. She barely paused at her best friend's house to leave him a quick pee-mail on the fence and off we went along the sidewalk, past dog home after dog home. 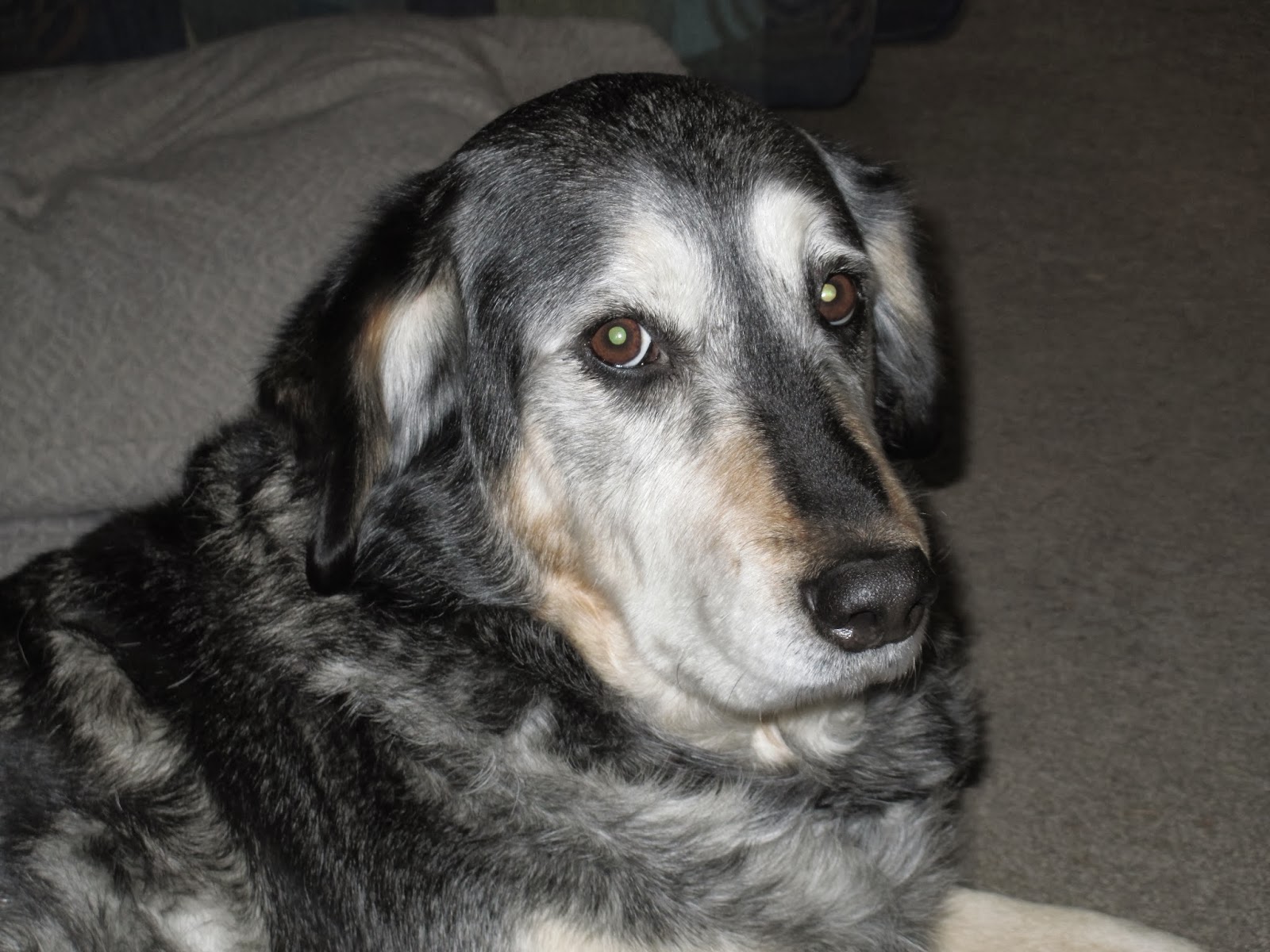 After burning off that initial burst of energy it was more difficult to keep her on task, her nose lowered too close to the ground. We reverted to a shortened leash and the "let's walk now" command repeated many times.

We crossed Shute Park near the Senior Center and the almost ready library before heading for Arbor Roses, rounded the perimeter of that development, more or less, and enjoyed a spectacular sunset over Jackson BottomWetlands. Lots of pink, yellow, and orange dappled the cloud-covered sky - all but the section between the far western and southern horizons where deepening sky blue remained. A story below, ducks quacked and took to the water, and we made only an infrequent stop. The water level was higher than I remember, extending well into the low-lying forest and within a couple yards of one remaining, privately-held out-building below the bluff. Yes, we’ve had a couple weeks of wet and it shows.

Leaving Arbor Roses, we crossed the Portland and Western tracks, returned through Shute Park, only stopping for a couple trees. By this time Penny’s mouth was open and her nose pointed ahead. She wanted to keep up with me, enjoy the walk, and, frankly, get home to her water dish and dinner. It’s rare for her to go two blocks without a break for an intensive olfactory investigation of trees, utility poles, street signs, and frankly, just about any blade of grass or other piece of landscaping material.

One last pass at her best buddy Noodle’s fence – he was inside – and we returned home. Can’t remember another time we spent an hour walking. She’s sacked out on her bed, stomach nowhere near what she considers full but well-fed and watered. Will her dreams be different tonight? Just endless legs twitching, covering remembered distance? 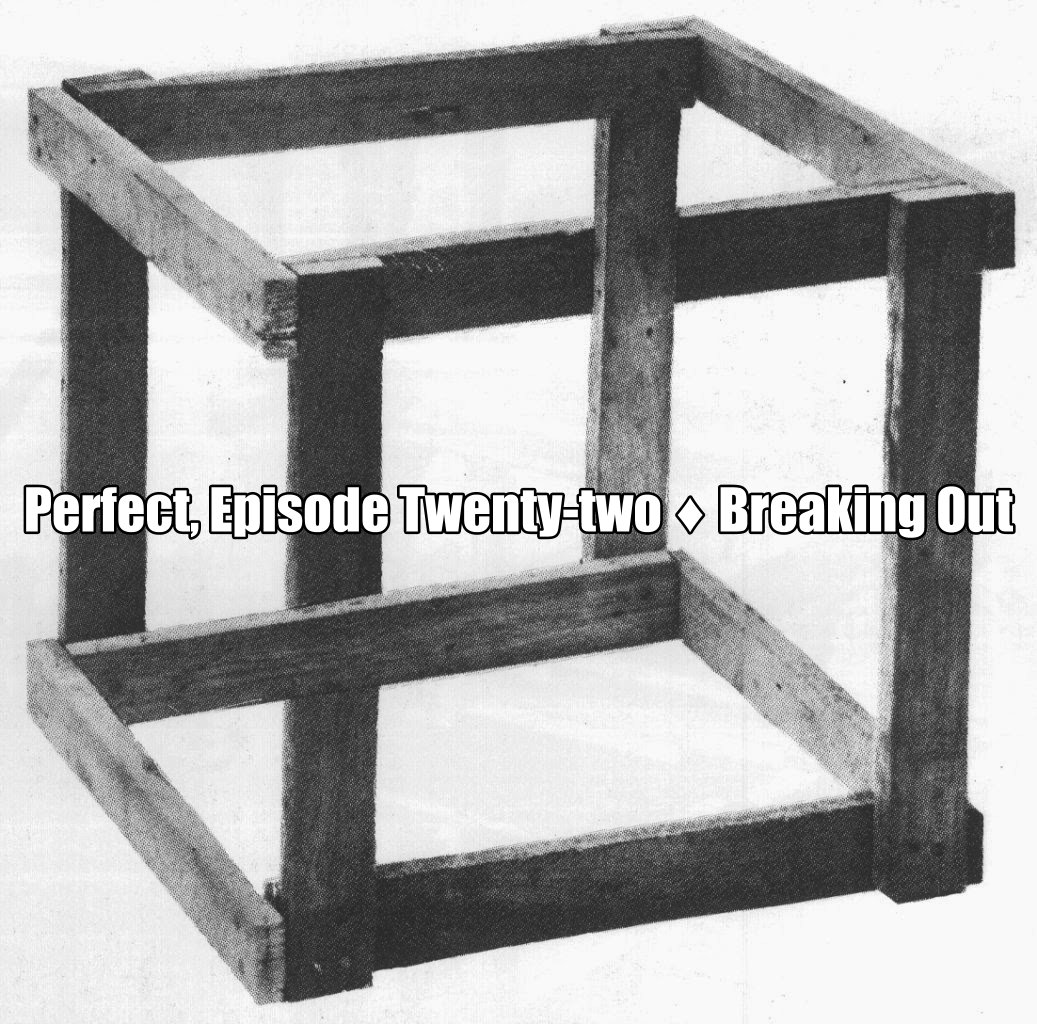 Last time, George and Anita found themselves in a shipping crate. They've been there a couple hours. Will someone rescue them or will they have to find their own way out. It's all in...

Over at Westside Writers I've added a couple posts of interest to fellow writers:

Trying to find the right word for a sound?

All About Verb Tenses

Email ThisBlogThis!Share to TwitterShare to FacebookShare to Pinterest
Labels: about writing, grammar, writing

Another great site listing webserials, including Perfect. Check them out at Muse's Success. Thanks!
at 7:29 PM No comments:

As of today, Perfect is now listed in EpiGuide! Thanks!

And a big welcome to new visitors! Hope you enjoy the webserial.
at 12:04 AM No comments:

My oh my, but aren't there just so many options?!? What is an author to do? Facebook, Google+, Pinterest, Reddit, StumbleUpon, Twitter, Tumblr, EpiGuide, WebFictionGuide, GoodReads....how are we to manage all that and still find time to write? (Not to mention work a day job if you're just starting out!) Oh, and don't forget a website and blog.


Looking forward to reading what works for other writers, bloggers, and creative people out there. Just remember, while comments are eagerly sought, spam is not - so comments are moderated.
at 9:13 PM No comments:

It's here and was published yesterday! After a long hiatus (boy did it ever take such a long time to go up the Mississippi from Saint Louis to Hannibal!) George and Anita are back and it's finally time to get off the Harmonie in the once and future riverport town of Hannibal. But George is convinced that they will have to pass through an Informateur scanner when they disembark. How ever will they do it? Find out in...

And don't worry. You won't have to wait so long for the next episode. Episode Twenty-two is written and undergoing final editing. It will be published on Friday, 14 February, 2014.
at 3:50 PM No comments: